This is not as trivial as it may sound. Missing data are elements in the matrix with no value, in R usually replaced by NA (not available). Note that there is an important difference between 0 and NA. It makes sense to replace missing value by zero if the entity is really missing (e.g. species was not recorded and gets zero cover or abundance), but it makes no sense to replace it by zero if the entity was not recorded (e.g., if I didn't measure pH in some samples because the pH-meter got broken, I should not replace these values by 0, since it does not mean that the pH of that sample is so low). Samples with missing values will be removed from the analysis (often silently without reporting any warning message), and if there are many missing values scattered across different variables, the analysis will be based on rather few samples. One way to reduce this effect is to remove those variables with the highest proportion of missing values from the analysis. Another option is to replace the missing values by estimates if these could be reasonably accurate (mostly by interpolation, e.g. from similar plots, neighbours, values measured at the same time somewhere close, or values predicted by a model).

Outliers are those values within a given variable that are conspicuously different from other values. Outlier value could get quite influential in the analysis, so it is worth to treat it in advance. How “different” the value should be to become the outlier is often based on a subjective threshold. As a rule, we should not remove some samples as outliers after the analysis is done just because removing it will improve our result; there must be a more sound reason for removing it. One option is that the outlier is an error in measurement or sampling; therefore, first, spend a reasonable effort to ensure that such value is not a mistype (either in the field or when retyping the data into a spreadsheet). Another option is that the sample itself really describes conditions that are rather different from the rest of the data set; if there are very few such specific samples, it may be reasonable to remove them, since there may not be enough replications to describe this difference or phenomena. For example, in the river valley dataset, there are some vegetation plots sampled on limestone bedrock, although most of the plots are from an acid bedrock; since there are 97 samples in the data set, and only three are on limestone, it may be reasonable to delete them from the dataset if we are interested how, e.g. soil pH, influences richness or species composition. 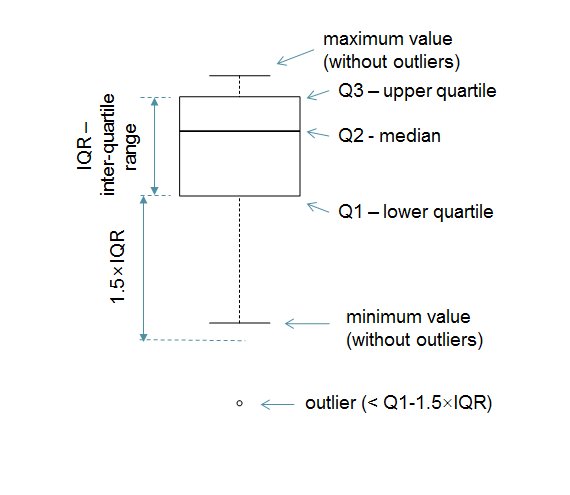 Figure 1: Definition of outliers in the box plot. An outlier is shown by circle below the non-outlier range of values.

Using pH values available from Vltava river valley dataset as an example, Fig. 2 illustrates the use of box plot and histogram to identify outliers1). Boxplot indicates that there are four outliers with pH value too high. Histogram confirms that three pH values above 6.0 are really separated by a gap from the other pH values. Closer examination reveals that three samples (namely 32, 33 and 34, highlighted by red colour) are from the same transect which was made in a limestone bedrock, which is why they have rather high values of soil pH. When I was sampling the data, I was aware that there is limestone, and I hoped to have high pH samples in my dataset; that time I did not think that it will be the only three plots between all 97 plots which will be on a limestone. These values are therefore not a mistake, but they are outliers since they describe a different phenomenon (forest on limestone bedrock) which does not have enough replicates in the dataset. I may either delete them or go back to the field and try to collect more limestone samples. The fourth value indicated as an outlier by boxplot (highlighted by green colour) is a sample done in a different area, perhaps also on some small limestone patch; however, since I am not sure with that, I would not remove it as an outlier (according to histogram this value fits the overall distribution, although this would change if the histogram breaks are set up more fine). 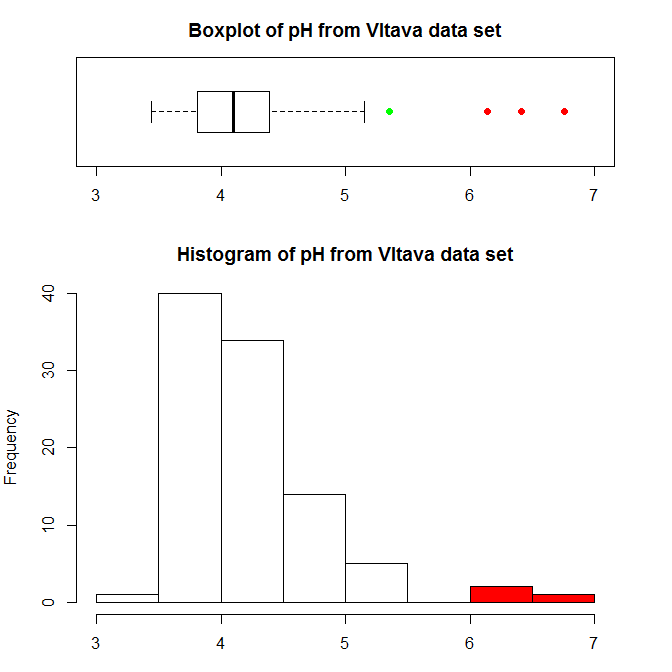 Figure 2: Boxplot (above) and histogram (below) of soil pH values from Vltava river valley dataset.

A good indicator of whether data need to be transformed is projecting the values using the histograms and checking whether the distribution is symmetrical, right-skewed or left-skewed (Fig. 3). Ecological data are often right-skewed because they are limited by zero at the beginning.

where constant a is usually 1, but if y is from interval <0;1>, than a > 1 (to maintain positive y’ values); constant c can be added if y contains zeroes, since log (0) is not defined (-Inf), and can be 1 or some arbitrary selected small value (e.g. 0.001). Note that constant c can influence the results of the analysis (e.g. ANOVA), and it is better to select the value which makes the transformed distribution the most symmetrical. Example on Fig. 4 shows the relationship between the area of the country and it’s population; both variables are strongly right-skewed, and without transformation, the whole relationship is driven by few large or populous countries; after log transformation, a strong correlation appears. 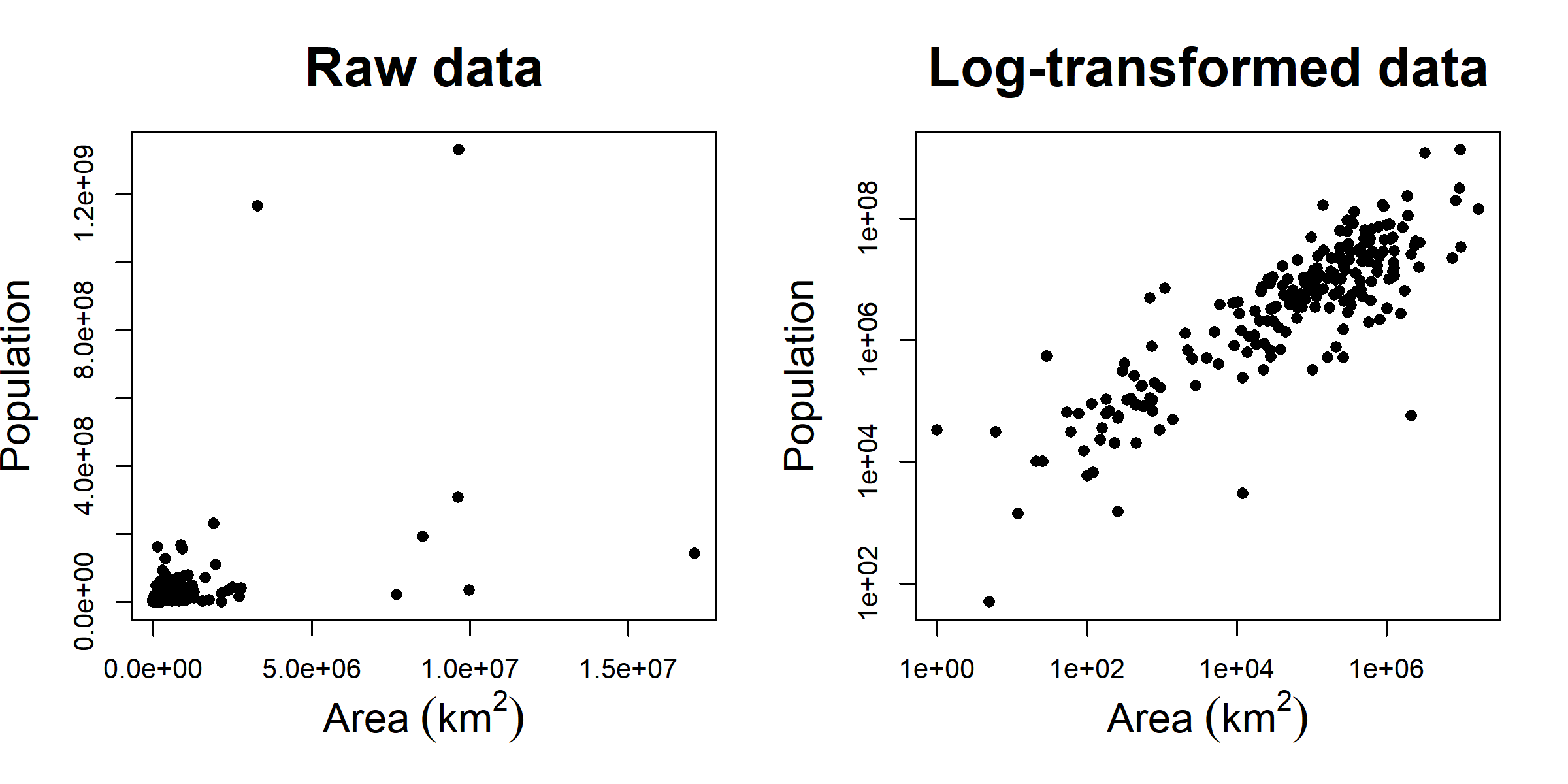 Figure 5: Difference between log and sqrt transformation. For the meaning of the pig shape, see below. 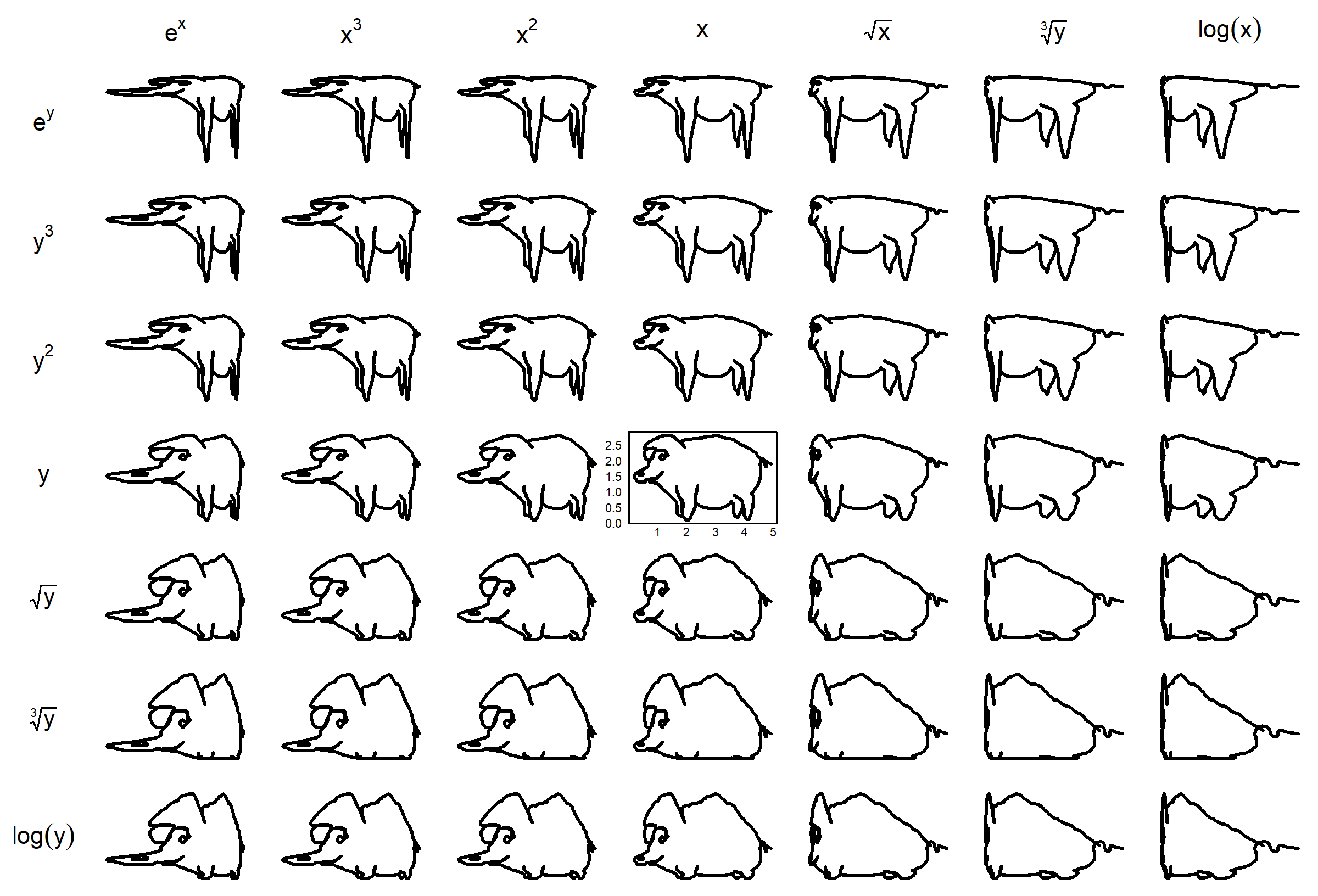 Figure 6: The pig in the middle is "normal pig", with parameters as it should be. All other pigs can be transformed into the normal pig by the transformation in the upper and left figure margin. So, for example, if the distribution of your data look like the pig in the lower-right corner, you may need to apply the log transformation on both x and y variables to obtain normal pig.

Standardization changes the data using a statistic calculated from data itself, e.g. mean, range, the sum of values (it is data-dependent). The most common reason to apply standardization is to remove differences in relative weights (importance) of individual variables or samples.

While the variables in the environmental or trait matrix are often of very different types (qualitative, quantitative, ordinal) and measured in very different units, the species composition matrix is homogeneous, with all variables (species) measured in the same units (frequencies, abundances, covers, presences-absences).

It is always good to check which units and what range of values is used to quantify the occurrence of species in the samples, and transform data accordingly. For example, if the values are percentage estimates of plant covers (often used in vegetation studies), log or sqrt transformation may be necessary, since these covers have often very right-skewed distribution (covers between 1-15% are far more common than covers >25%). However, if the estimates of the plant cover have been done in Braun-Blanquet scale (r = 0.01% of cover, + = 0.1%, 1 = 1%, 2m = 5%, 2a = 10%, 2b = 20%, 3 = 37.5%, 4 = 62.5%, 5 = 87.5%) and these values are then transformed into ordinal scale (r -> 1, + -> 2, 1 -> 3, ..., 5 -> 9), these 1-9 ordinal values in comparison to percentage cover already contain implicit log-transformation and does not need to be further transformed. In some cases, transforming data into presences-absences may be useful, e.g. if the estimates of species abundances are inaccurate or data are merged from different sources using different scales or estimation methods.

Species composition data are also often subjected to standardisation, either by species (columns) or samples (rows)(Fig. 7). Standardization by species makes species to have the same importance (i.e. species with overall lower abundances will be the same important as species with overall higher abundances). It may not always be meaningful, e.g. if species occurs only in one sample, standardization by species will put a high weight on this sample and it will become very different from the others. Standardization by samples is useful in the case that the analysis is focused on relative proportions of species, not their absolute abundances, e.g. because recorded abundances are dependent on sampling effort, and this effort differs between samples (the effort is related to time spent at the plot, number of traps, or can be influenced by bad weather affecting the mobility of the sampled organisms). 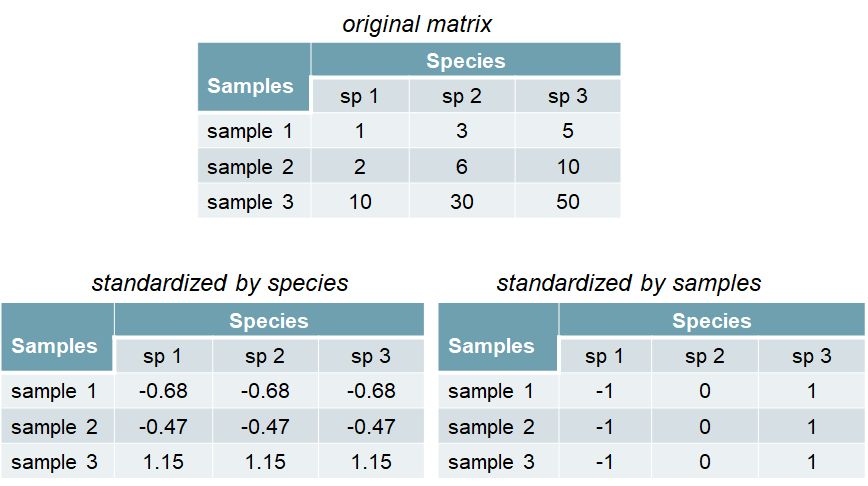 where yij is the abundance of species j in sample i, and yi+ is the sum of abundances of all species in sample i (row sum). As is clear from the formula, it removes differences in absolute abundances between samples. It calculates relative species abundances per sites (species profiles) and these relative values are square-rooted, which reduces the effect of species with high abundances (Fig. 8). Euclidean distance applied on Hellinger standardized data results into Hellinger distance, which has suitable properties for analysis of community data. 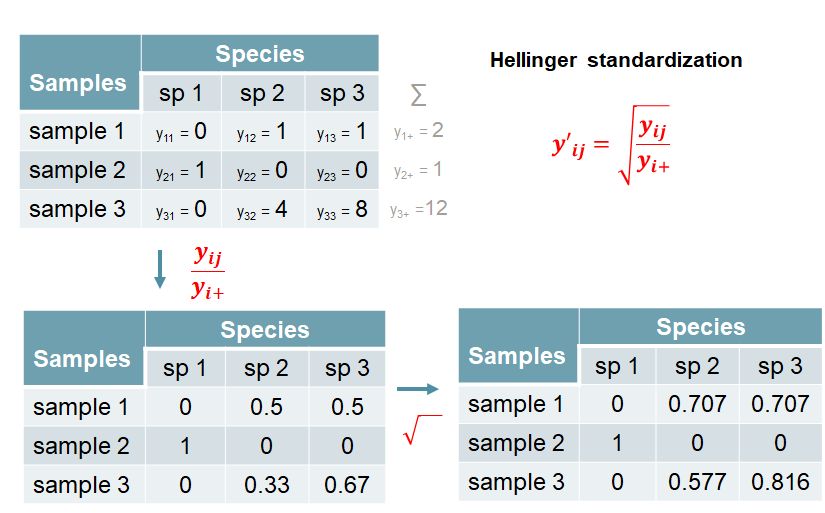