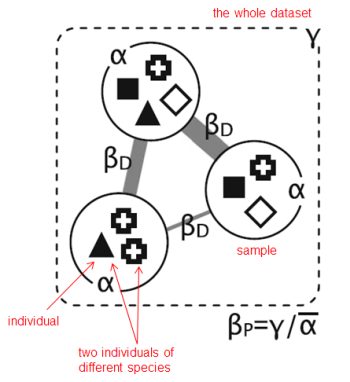 There are several concepts which aim to specify different flavors of diversity. Perhaps the oldest is the Whittaker's concept of alpha, beta and gamma diversity (Whittaker 1960). Here, Whittaker build upon Fisher’s alpha and extended the concept of local species richness (alpha diversity) for regional species richness (gamma diversity) and change in species composition among samples (beta diversity). Among complementary approaches is the one introduced by Jurasinsky et al. (2009), identifying inventory diversity (alpha and gamma diversity, differing by scale at which it is applied), and differentiation vs proportional diversity (both being beta diversities – differentiation one calculated by dissimilarity indices or as variation of species composition matrix, while proportional as the ratio between gamma and alpha diversity).

To think about diversity as only the number of species would be oversimplification. Diversity has at least two components: richness and evenness, where richness is the number of units (species, communities), while evenness is the relative abundance of individual units (e.g. relative number of individuals of each species). Imagine two communities, both with ten species, the first with all species represented by the same number of individuals (perfectly even), while the second with one species dominating and the other rare (highly uneven). The first community inevitably gives impression of higher diversity, since when you walk through it, you are likely to encounter different species as you pass by; in the second, uneven community, you are likely to keep encountering the same, dominant species, while just occasionally bumping into individuals of the rare species. That is why implementing evenness into diversity indices may be important, not only counting the number of species. There are several diversity indices differing by the degree in which they consider richness and evenness (species richness, Shannon entropy and Simpson concentration index in this order putting the weight on evenness from no in case of species richness to high in case of Simpson), and also several indices of evenness itself. Mark O. Hill (1973) showed that all three diversity indices can be summarized using so called Hill numbers of order q, which represent effective numbers of species (increasing q puts less weight on rare species and more weight on abundant species). Hill numbers can be used to draw diversity profiles, which allow for elegant comparison of diversity among communities considering both richness and evenness.

Since Earth is finite, each community has theoretically countable number of species and their evenness. However, these theoretical numbers are usually not readily available, since we estimate diversity of communities by sampling, and sampling is always incomplete. Diversity estimated from sampled data is dependent on sampling effort, and if diversity (alpha, beta, gamma) should be compared among different communities, the sampling effort should be standardized. This can be done using rarefaction curves, which allow for comparison of diversity based on the same number of individuals or the same number of samples. Eventually we can go further and standardize our samples on the same community completeness (Chao & Jost 2012). Other way is to use some of the diversity estimators to estimate the number of unseen species which have not been detected by sampling, but are expected to be observed if the sampling effort increases. Two families of diversity estimators are available, the first based on abundance data (abundance of species in one sample quantified e.g. by number of individuals or amount of biomass) and the second on incidence data (frequency of species presences in the set of samples, where in each sample only species incidence, i.e. presence-absence, is recorded).