This example is using simulated ecological data structured by two unequally long ecological gradients. You can imagine these gradients e.g. as elevation (the longer one) and moisture (the shorter one), and the samples as forest communities evenly sampled from low to high elevation, and in each elevation from wet to dry habitats (wet habitats are e.g. those close to the river, while dry habitats are far from the river on a ridge). One dataset (simul.short) is relatively homogeneous, with both gradients being rather short (low species turnover), while another (simul.long) is relatively heterogeneous, with long gradients. Again, you can imagine homogeneous dataset as sampling which was done in a relatively narrow range of elevation and moisture, e.g. from 200-400 m in elevation, and from a bit close to a river to a bit farther from the river; the forest communities will differ, but not that much, and individual samples will still share many species. Heterogeneous dataset, in contrary, can be imagined as spanning a broad range of elevations (lowland to high altitudes) and a broad range of moisture (forest beside river periodically flooded vs forest on the dryest ridges far from the river).

Each dataset contains 70 samples, placed evenly along both virtual ecological gradients (distances between neighbouring samples are 200 units in case of the simul.short dataset and 1000 units in case of simul.long dataset). Hence, the samples create an even grid in ecological space (note differences in the length of the gradients between the left and the right figure): 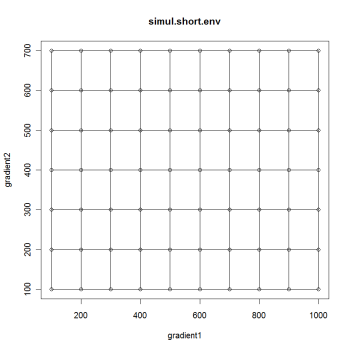 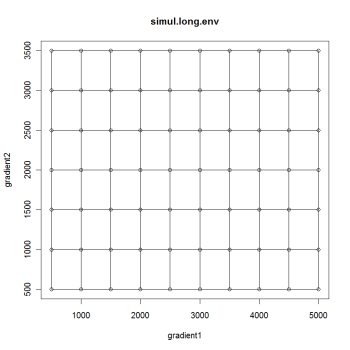 I used both matrices to calculate PCA, CA, DCA, tb-PCA (with Hellinger transformation), and PCoA with NMDS, both with Bray-Curtis distances among samples (in case of PCoA, I square rooted the Bray-Curtis distances to make them metric, see details here). Data are presences-absences, so there was no need to transform them. Then, I draw ordination diagrams with individual samples connected in order to form a grid. The visualization of simulated data in ordination, which looks like crumpled grid paper, was inspired by studies of Bruce McCune (McCune 1994 and 1997).

For the dataset simul.short.spe the result looks like this: 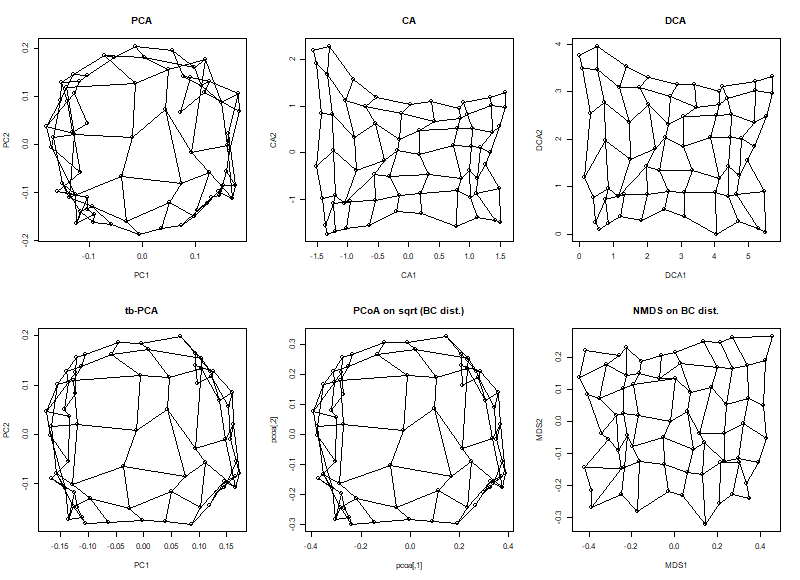 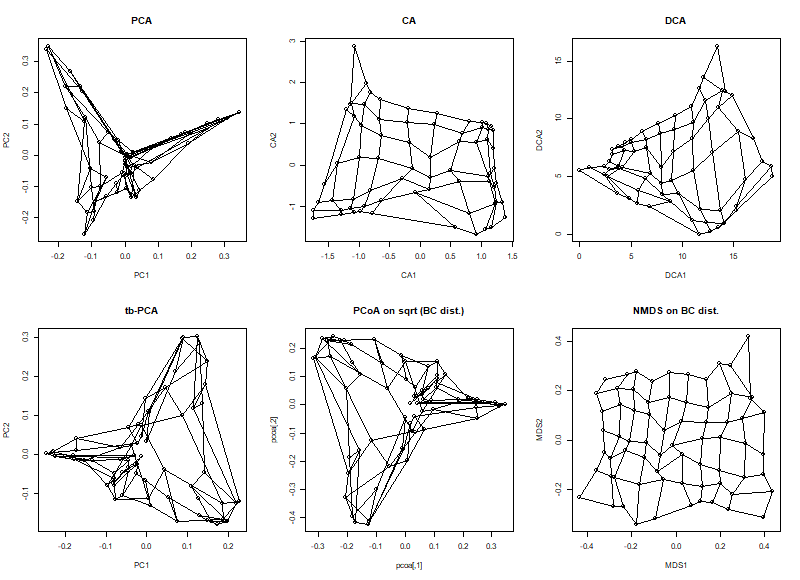 Script to make the ordination diagrams

1)
In case of metaMDS function, there may be difference of output between different versions of vegan library. Since vegan 2.0-0, the function metaMDS use as a default engine function monoMDS, which gives slightly different result than original engine function isoMDS from library MASS. Before, the NMDS diagram of simulated data along long gradient looked somewhat like a ball. To see this, you may add the argument engine = “isoMDS” into metaMDS function.
en/mix/ordination_artefacts.txt · Last modified: 2020/04/10 18:47 by David Zelený