Ordination is the way how to make an order in the set of community samples and the way how to reduce multidimensional information stored in community data into few imaginable, interpretable and printable dimensions. There are many ordination methods, with different fields (botany, zoology, microbiology) preferring different ones. Ordinations are focused on finding interpretable trends in data, represented by changes in species composition with possible underlying changes in environmental gradients. We may use it either for a description of community pattern (which is usually the purpose of unconstrained = indirect ordination) or to explain and test changes in species composition by some (e.g. environmental) variables (constrained = direct ordination).

Numerical classification stands opposite to ordination - while ordination seeks the main gradients in the continuum of community samples, classification tries to separate this continuum into a finite number of groups (clusters), each containing more or less similar samples.

Diversity analysis is in certain sense also analysis of species composition matrix, whose originally two-dimensional information (samples × species) is reduced into one-dimensional variables (like numbers of species in samples - alpha diversity, differences in species composition among samples - beta diversity, or number of all species in the matrix - gamma diversity). But diversity is not only about numbers of species, but also about their relative abundances - we will briefly review also the concepts of true diversity, evenness and their representation by different diversity indices. Diversity is also influenced by sampled area (species-area curve) and sampling effort (bias due to undersampling). 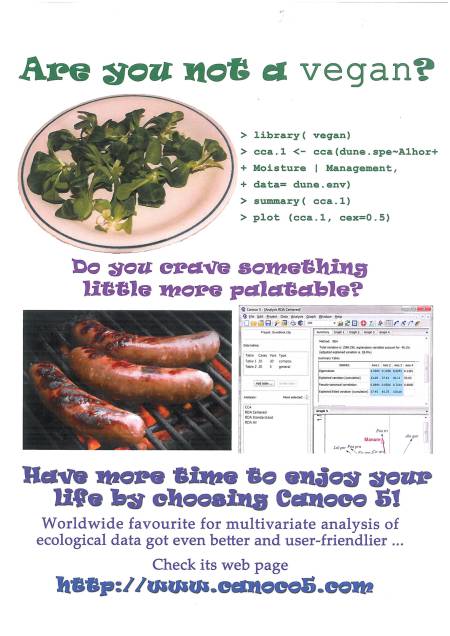 Figure 2: Are you not a vegan? Try something more palatable! An ad for CANOCO 5, 2015. I suspect the author is Petr Šmilauer. Just pity that CANOCO 5 after opening on your computer does not produce so lovely smell as those sausages in the advertisement. This website is focused on the use of R for all analyses. For most ordination methods we will use vegan package written by Jari Oksanen et al., with some functions also from ade4 by Stephen Dray & Anne B. Dufour and labdsv by Dave Roberts. You may want to, however, learn also some other software options. For most ordination methods, an excellent and user-friendly solution is CANOCO 5 (Windows only) developed by Cajo ter Braak & Petr Šmilauer, an update of favourite CANOCO for Windows 4.5 (see ad on Fig. 2 and check here if you want to know how does CANOCO 5 compare with vegan from the view of CANOCO authors). Although I prefer to do ordination analyses in R, I sometimes opt for CANOCO 5 because of its convenience, and also because it does great ordination diagrams (R is still staying behind in this aspect). Cluster analysis (and also most of the ordination methods) are available in PC-ORD 6 software of Bruce McCune et al. (see here for comparison of CANOCO 5 to PC-ORD 6); I must admit I do not favour this software for somewhat not intuitive workflow, but it does offer rather wide range of multivariate methods (some more elaborated than in CANOCO 5, e.g. NMDS with more options and detail report). For analysis of diversity (e.g. diversity indices or rarefaction) you may consider using EstimateS 9 by Robert R. Colwell. These are just some examples with which I am familiar; you may find a range of other (free or paid) software.