This method is also known as MDS (Metric Multidimensional Scaling). While PCA preserves Euclidean distances among samples and CA chi-square distances, PCoA provides Euclidean representation of a set of objects whose relationship is measured by any similarity or distance measure chosen by the user. As well as PCA and CA, PCoA returns a set of orthogonal axes whose importance is measured by eigenvalues. This means that calculating PCoA on Euclidean distances among samples yields the same results as PCA calculated on covariance matrix of the same dataset (if scaling 1 is used).

Non-metric alternative to PCoA analysis - it can use any distance measure among samples, and the main focus is on projecting the relative position of sample points into low dimensional ordination space (two or three axes). The method is distance based, not eigenvalue based - it means that it does not attempt to maximize the variance preserved by particular ordination axes and resulting projection could therefore be rotated in any direction.

If the default setting of metaMDS function is used, the data are automatically (if necessary) transformed (in this case, combination of wisconsin and sqrt transformation was used). In this case, stress value is 21.7. 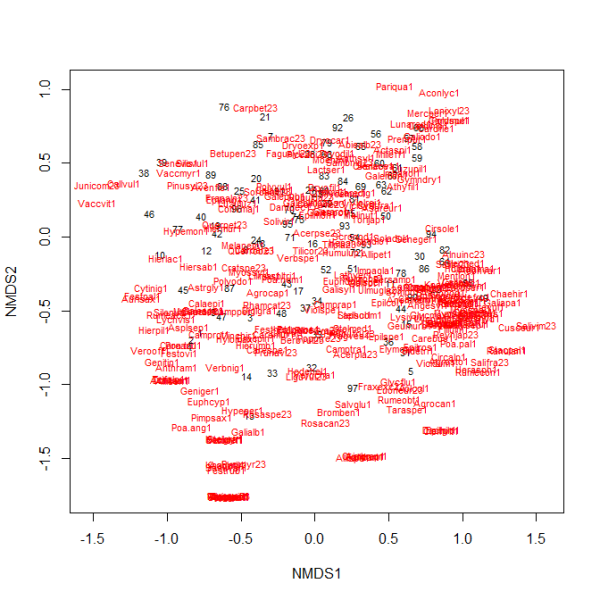 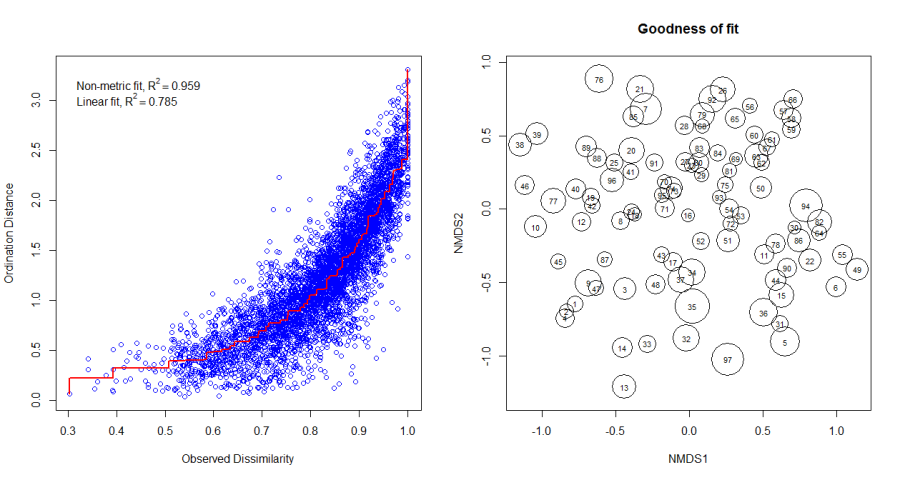 Use data from the variable eurodist, which is available in R (you don't need to install any library, just type eurodist). This variable contains real geographical distances among big European cities (in km).

Use data about confusion of different Morse codes, originating from Rothkopf's experiment with Morse codes. This is a classical data set, used by Shepard (1962)1) to demonstrate the use of NMDS analysis.

Check the example Betadiversity of coral reefs after disturbance to apply NMDS analysis on community data from coral reefs.