You are not allowed to perform this action
en:uncordi

I developed a simple interactive online tool visualizing the use of all unconstrained ordination methods in vegan package discussed on this website, using a set of example datasets (why?). Scroll down for a short manual how to use the app. 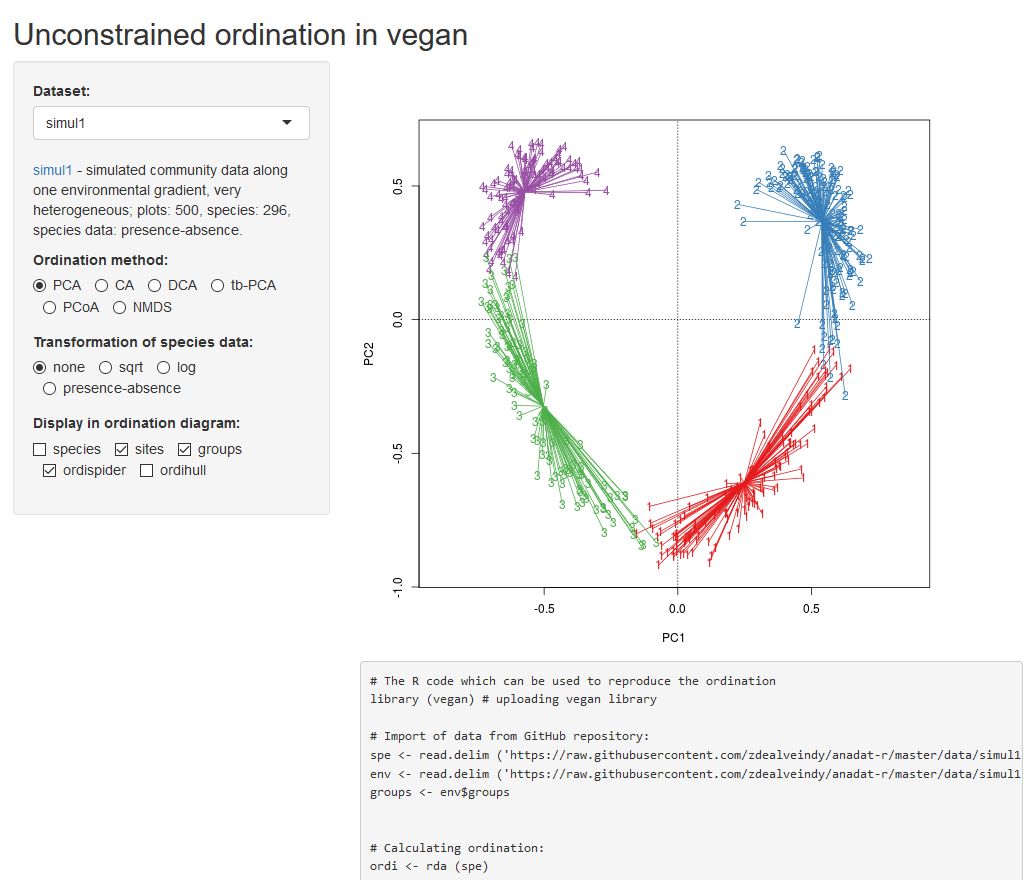 How to use the app

The app comes with two parts: clickable input (where you can choose dataset, ordination method, transformation etc.), and then the output (ordination diagram, reproducible R code and numerical output of analysis). At this screen, the input is above the output; if you open the app in the new window, the input is at the right and the output is in the main panel).

Currently five example community datasets are provided. Vltava is rather heterogeneous forest vegetation dataset (sample across wide range of habitat conditions and forest types on the slopes of deep Vltava river valley). Grasslands is rather homogeneous grassland vegetation dataset representing narrow range of habitat conditions (acidophilous grasslands on shallow soils). Simul* datasets were generated artificially using simulation model, in which species response to one (simul1) or two (simul.short and simul.long) environmental gradients. Simul1 is the most heterogeneous dataset, structured by only a single “environmental” gradient, and is good to inspect the shape of artifacts it can produce in various ordination methods. Simul.short and simul.long are structured by two uncorrelated gradients (with gradient2 being shorter than gradient1); simul.short represents relatively homogeneous community (both gradients are rather short), while simul.long is highly heterogeneous.

Set of ordination methods is provided: PCA (linear method), CA and DCA (unimodal methods), tb-PCA (transformation-based PCA, with pre-transformation of species data by either Hellinger or chord distance sensu Legendre & Gallagher 2001), and PCoA with NMDS (distance-based methods, with several choices of distance coefficient). When tb-PCA is selected, another menu (Pre-transformation of data for tb-PCA) appears below, in which one may select the pre-transformation method for the compositional data. When PCoA or NMDS are selected, Distance index for PCoA menu will appear, offering several distance indices which are first applied on compositional data before PCoA or NMDS are calculated.

Some datasets may need to transform the data; e.g. vltava and grasslands contains percentage species estimations with strongly right-skewed distribution and species with high cover will have too high influence in the analysis. Transformation of species data is a way how to reduce this effect.

Choose items to be displayed in the ordination diagram. Groups refer to classification of samples into several clusters (the method of classification differs among datasets, e.g. cluster analysis in case of vltava dataset, or manual classification into vegetation associations in case of grasslands dataset). Ordispider and ordihull are yet other methods how to visualize groups of samples. Envfit fits selected environmental variables onto ordination diagram using multiple regression; you can choose between displaying all environmental variables or just those which are significant (the significance here is considered without correcting for multiple testing issue). Numerical results of envfit could be checked at the bottom window in the main panel.

Contains ordination diagram and R output (set of functions which can be used to draw the diagram). Below the box with R functions is result of ordination (object ‘’ordi’’), and in case that ‘’envfit’’ option was selected in “Display in ordination diagram” option, another box reporting the results of environmental variables fitting will appear.

Note one difference: the color palette in the application is modified (it is not using the standard colors, but colors from palette “Set1” in “RColorBrewer”). This is why the ordination diagram reproduced by the provided R script will appear in different colors.