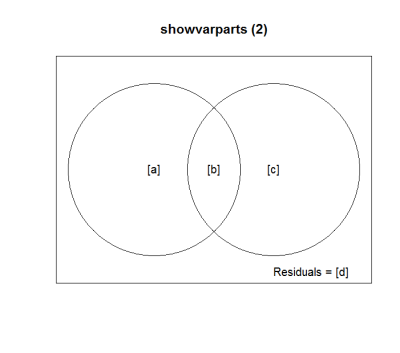 If the variation is partitioned among groups with the same number of variables (e.g. two soil and two climatic variables), then the variation explained by each group is comparable without adjustment. However, if groups contain different numbers of variables, variation explained by not adjusted R2 is not comparable since R2 tends to increase with the number of explanatory variables. Here, the use of adjusted R2 is recommended.

1)
As to the distinction between variance and variation, Legendre & Legendre (2012) note: “The term variation, a less technical and looser term than variance, is used because one is partitioning the total sum of squared deviations of y from its mean (total SS). In variation partitioning, there is no need to divide the total SS of y by its degrees of freedom to obtain the variance s2y.” The first edition of the book Multivariate Analysis of Ecological Data using CANOCO (Lepš & Šmilauer 2003) was using the term variance partitioning, while in the second edition (Šmilauer & Lepš 2014), authors adopted the term variation partitioning, noting: “It was called variance partitioning in the original paper, but we prefer, together with Legendre & Legendre 2012, the more appropriate name referring to variation, as we also include unimodal ordination methods in our considerations.”
2)
Note that in CANOCO 5, the coding of the fraction follows different logic - [c] is shared variation, and [a] or [b] are partial fractions; meaning of [d] remains the same (unexplained variation).
en/varpart.txt · Last modified: 2021/03/03 11:54 by David Zelený