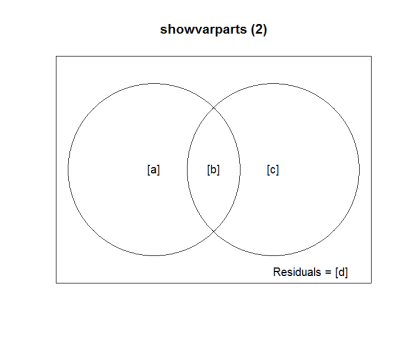 The library vegan offers function varpart, which can partition variation among up to four variables (or groups of variables). Note that varpart is based on redundancy analysis (rda) and uses adjusted R2 to express explained variation. The reason for using only rda is that in R, there is still no function available to calculate adjusted R2 for unimodal ordination methods (like cca).

Use of varpart function (using vegetation data from Carpathian wetlands)

Example: how much variation in species data (vasc.hell) explains variables Mg and Ca (from chem)?

In this function, the first is coming the species matrix, than explanatory matrices (or variables) - if using formula interface, each has to start with tilda (~). If these variables are part of matrix of explanatory variables, you need to specify the environmental matrix in argument data =.

Alternative way how to use the function is not using formula interface:

or, in case you use not-transformed data and you want them to be transformed (using decostand function):

(argument transfo is passed into function decostand together with species data).

I can also plot directly so called Venn's diagram:

Note - the plotting function is called plot.varpart, but if I use generic plot function on object vp1 (which is of class “varpart”), I don't have to specify the whole name. 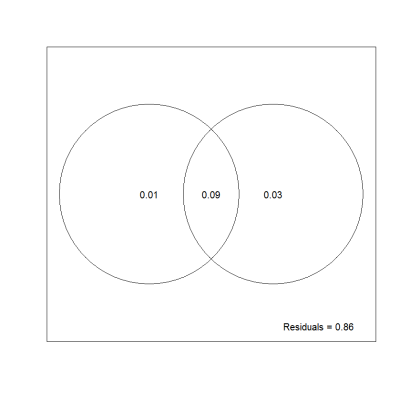 1)
As to the distinction between variance and variation, Legendre & Legendre (2012) note: “The term variation, a less technical and looser term than variance, is used because one is partitioning the total sum of squared deviations of y from its mean (total SS). In variation partitioning, there is no need to divide the total SS of y by its degrees of freedom to obtain the variance s2y.” The first edition of the book Multivariate Analysis of Ecological Data using CANOCO (Lepš & Šmilauer 2003) was using the term variance partitioning, while in the second edition (Šmilauer & Lepš 2014), authors adopted the term variation partitioning, noting: “It was called variance partitioning in the original paper, but we prefer, together with Legendre & Legendre 2012, the more appropriate name referring to variation, as we include also unimodal ordination methods in our considerations.”
2)
Note that in CANOCO 5, the coding of the fraction follows different logic - [c] is shared variation, and [a] or [b] are partial fractions; meaning of [d] remains the same (unexplained variation).
en/varpart.1429531915.txt.gz · Last modified: 2017/10/11 20:36 (external edit)