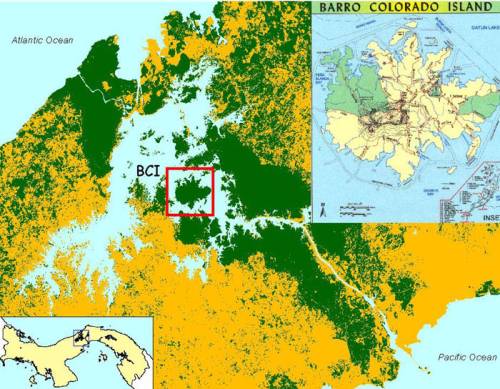 Data from 50 ha permanent plot, established by Smithsonian Tropical Research Institute and Princeton University to study the dynamics of tropical forest vegetation. The available dataset contains 50 1-ha plots, which align with each other. In each plot were recorded numbers of individuals of all forest species (only individuals with DBH > 10 cm are available in this dataset) and several environmental variables (see the table below).

Soil chemical analyses are also publicly available for BCI plot. Original soil data have a form of soil maps, which have been created from 300 collected and analysed soil samples by kriging and can be accessed here; spreadsheet dataset, created as kriged estimates for 20×20 m plots, is available here. For purpose of this example data, the soil data from 20×20 m plots were lumped into 1-ha plots to make it compatible with the vegetation dataset.

Barro Colorado is an island in the lake Gatun in central Panama. Since 1923, the island is a place of intensive scientific research focused on ecology of lowland tropical forest, and from the floristic point of view it's perhaps the most explored tropical area (of similar size) in the world. The studied 50-ha permanent plot is surveyed periodically since 1980.

The file with coordinates, which can be opened in Google Earth: bci.kml2) (source: http://cc.oulu.fi/~jarioksa/opetus/metodi/).

Variables available in BCI.env dataset (originally from BiodiversityR library, Kindt & Coe 2005). Note that original variables, which have been in BCI.env dataset in earlier versions of BiodiversityR library (Precipitation, Elevation, Age.cat and Geology) and which were based on data published in Condit et al. (2002) were removed (they have been, so as so, of minor use, since they lack the resolution) and replaced by new topographical variables from De Caceres et al. (2012).

Map of elevation of the 50ha forest dynamics plot. Note that data for this map have higher resolution than the elevation data in BCI.env dataset. Source: CTFS website. 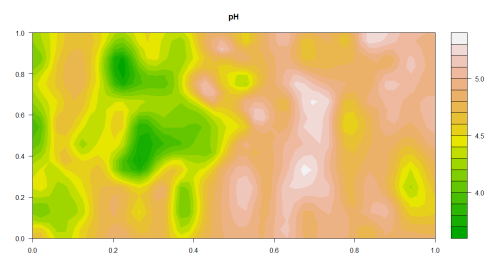 Soil map for pH. Note that resolution of this map is 20×20 m, although resolution 50×50 m is used for further analyses. 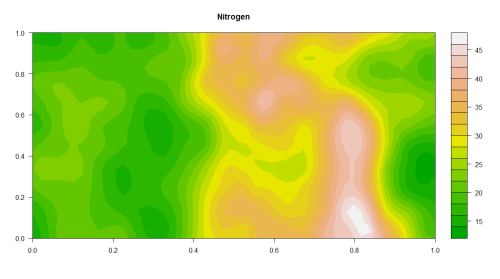 Soil map for nitrogen. Note that resolution of this map is 20×20 m, although resolution 50×50 m is used for further analyses.

Script for direct import of data into R

Note: The script for the preparation of soil data and drawing soil maps can be found here.

Note: access to the whole dataset could be applied using online form on website of Smithsonian Tropical Research Institute or National Center for Ecological Analysis and Synthesis.

1)
part of freely available data included in libraries vegan and BiodiversityR
2)
you need Google Earth installed on your computer to open this file
3)
for details regarding soil chemistry analysis see protocol used for the sampling of the BCI plot
en/data/bci.txt · Last modified: 2019/03/30 17:32 by David Zelený