You are not allowed to perform this action
en:r

For NumEcol 2020 class (semester 108-2): make sure that you have the latest version of R and RStudion installed on your computers:

Note that first you need to install (or update) R on your computer (this is where all commands are processed), and then you install RStudio (this is just editor, a wrapper around R). RStudio without R does not work.

R is a programming language and programming environment for statistical analysis and data visualization. The R language is inspired by S language, which was invented and developed by John Chambers from Bell Laboratories and which is the base for commercial software S-PLUS. In contrast to S-PLUS, R is a freeware application, introduced by Ross Ihaka and Robert Gentleman (the R in their first names gave the name to the program).

How to install R

How to update R

If you have R already installed on your computer and you want to update to a newer version, the easiest way is simply to install the new version along with the old one (and later possibly delete the old one if you don't need it or you want to save space on hard disk). All R versions are, if not changed, installed beside each other in R subfolder of Program Files folder (in case of Windows). You may need to install also all the libraries you used in the previous version. You can simply copy the folder library from the old R version to new R version and run an update procedure in new R version using the command update.packages (however, I do not recommend to do this if you are updating to new major version, e.g. from version 3.4.x to 3.5.0; in that case, the manual installation of packages (using install.packages function) is preferred). For this, do the following:

How to install RStudio

Download the latest version from RStudio website and follow instructions for installation. If you already have RStudio installed in your computer, you may check whether you have the latest version and update if you don't (in RStudio menu, go to Help > Check for Updates).

RStudio is a convenient software, which combines R program with a text editor and graphical interface (and offers much more, like the organization of scripts and outputs into projects within a single folder, and for advanced users also convenient building of packages, document markup etc.). One thing I found a bit not handy is RStudio's native graphical output - it offers its' own unique sizeable graphical output into one of the subpanels, but this sometimes produces troubles (especially in the case when you draw more complex figures). The workaround is to use RStudio, but open the original drawing engine - just type windows () into the console, and a new active window will open (you can move it around the screen, or right-click on it by mouse and select “Stay on top” to keep it as the top window always visible on your screen).

Optionally, there is a number of other text editors, which can be associated with R, e.g. Tinn-R.

How to install R packages

R has a great option to extend the basic functionality for other functions wrapped into packages. There are thousands of packages in central repositories like CRAN or Bioconductor, and also in developers repositories like R-Forge or GitHub. For an overview of documentation for packages aggregated from these repositories check the website R Documentation.

If you have administrator rights for the computer, the packages will be installed into the library subfolder, usually located in c:\\Program Files\R\R-x.x.x\ 3). If you don't have administrator rights, you will be asked to install the libraries into some writeable location of the hard disc, by default into the Documents subfolder of your account (here, the following structure of subfolders will be created: Documents\R\win-library\3.2).

Most of the commonly used R packages for analysis of ecological data are available from CRAN, and to install them, use simply install.packages command in R (note that the name of the package should be separated by quotation marks, and if more than one library should be installed, wrap the names into character vector):

If you are using RStudio, you may use built-in function to install the packages, which is (in default setting of RStudio) located in bottom right panel, in the folder Packages - click the button Install, in Install from choose Repository (CRAN), and in Packages type the name of the package.

There are, however, examples of packages which are not available from CRAN for some reason - e.g. because they are still under development, or because they do not fit rather strict CRAN rules for hosted packages. Alternative places are e.g. R-Forge or GitHub.

GitHub doesn't offer precompiled package versions - you need to compile the packages from source on your computer. However, there is a convenient R function in R package devtools developed by Hadley Wickham, which can help you with installing packages hosted on GitHub: install_github. To install some package (here called MyPackage, first install devtools from CRAN, and then apply the function install_github:

(note that :: means that install_github function will be read from the devtools namespace without need to actually upload the whole devtools library). If the GitHub package contains C/C++/Fortran code which needs to be compiled, you still need to install the set of compilation tools called Rtools on your computer (see Install Rtools (for Windows users only) below).

R-Forge contains both source packages (files with extension *.tar.gz containing the original R code, which needs to be compiled during installation) and also already compiled binaries for Windows (*zip files, do not need to be built). The binaries are available only for the latest R version available, so if you are using the older version of R, you need to build the library from source. For example, to install package packfor4) for forward selection of variables directly from R-Forge, type

If you are using the latest R version, the package will probably install without problems. If not, you may receive the following warning message:

In that case, you need to install the package from source. Manually download the binary file from R-Forge (with *.zip extension) to your computer, and use the command install.packages with argument repos = NULL:

(note that this works if your downloaded file is the version of packfor 0.0-8 and it is saved in Downloads folder - modify this for your current needs). If even this option doesn't work, you may need to install the package from the source - download *.tar.gz version to your computer and use install.packages function with repos = NULL and type = “source”:

However, installing R packages from source is nontrivial task and may require that your computer has installed set of compilation tools, so called Rtools, because installing from source consists of several steps (compiling C/C++/Fortran codes, making documentations, checking for code errors, running examples etc.) - see instructions below how to install.

Install Rtools (for Windows users only) 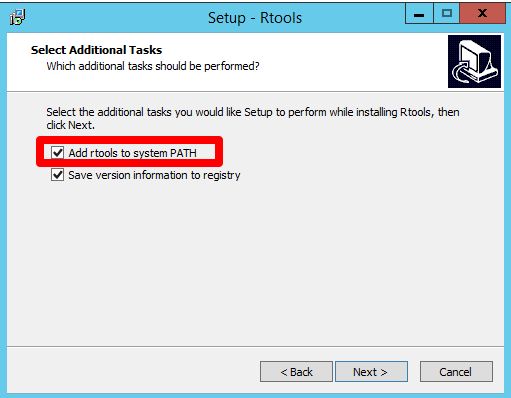 You do not need to install Rtools if

1)
This is a link to cloud storage, which will automatically redirect you to the local repository according to your geographical position. If doesn't work, use the manual selection in https://cran.r-project.org/mirrors.html.
2)
The argument ask = F in the function update.packages makes sure that the update function will not ask you to prompt updating each package separately.
3)
R-x.x.x stems for the R version, e.g. R-3.2.1
4)
Note that both forward selection function from this package have been included in the adespatial package available on CRAN.
en/r.txt · Last modified: 2020/02/12 06:56 by David Zelený